William Bailey R.P. (Registered Plumber) was set up as a small plumbing company in 1919 by the current Managing Director’s Great Grandfather William Bailey on his return from the First World War.

The Company was then passed to William Bailey’s son William Neville Bailey and then onto his son William Clive Bailey, under whom it became Limited in 1963.

In 2007 William Bailey had reached capacity at their Wellington Street, Ripley site and required larger storage, engineering and office accommodation and subsequently moved to much larger purpose built premises in Ambergate, Derbyshire to facilitate the ever expanding need for I.T., modern technology, CAD Design and off site pre-fabrication.

Since moving in 2007 from their new base the Company employs a dedicated workforce of engineers and staff who undertake both large and small major mechanical and electrical projects throughout the UK.

From 2011 to the present Stuart William Bailey, Great Grandson of the founder  has been Managing Director and runs the company alongside his brother Robert Bailey, Contracts Director while their Father Clive Bailey still works for the company as a Consultant. 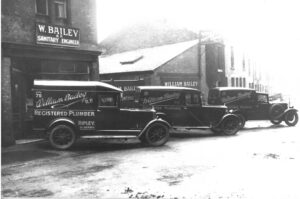 After the end of the 1914-19 war founder William Bailey upon leaving the armed forces established a small jobbing Company. As capital was low and vehicles in short supply he employed just a few men who literally pushed handcarts loaded with tools and materials around the locality to carry out small repairs. After 5 years of dedicated study William received the qualification of Master Plumber. His certificate dated 1925 is still proudly displayed in the current boardroom. In 1941 William became a member of the Institute of British Engineers indicating his clear intent to maintain and progress his abilities through sound engineering practice.

During this period many small valuable domestic contracts were undertaken and this steadily increased when William Neville Bailey his son joined the Company.

During the second World War a small number of engineers remained with the Company who had not been called up and were dispatched to skilfully lay heavy iron water mains for the armed forces training camps around the country.

Later a number of the firm’s engineers were disptached through the Ministry of Works based at Lambeth Bridge House, London to various ammunition factories around the country. One particular factory which a few may remember was the Vic Hallam Works. This factory provided much needed munitions around the country. The factory was run by a Maltese gentleman by the name of Mr Collaro who had moved to the Langley Mill area after having one London factory flattened by German bombing raids.  After World War II and the finish of hostilities in 1945 ironically William was still endeavouring to obtain the release of these engineers back into his employment. Eventually after many letters to the Ministry of Works, the Labour Exchange and his local M.P. Mr H. Blackman sometime after the men were released.

After the War one of the first contracts the Company secured in 1946 was the installation of a large volume of boiler plant and pipework for Derbyshire County Council. Records show a total of 804 houses completed during the period 1946-1947 highlighted by numerous requests to the Ministry of Transport for paraffin for blow lamps and petrol vouchers for vehicles which were still in short supply.

In 1963 William Bailey became a Limited private Company. The Company continued to expand after this period by taking on various projects within the commercial market which was quite buoyant from successive government house rebuilding programmes. Through 1969 and 1970 William Bailey installed plumbing services to 2500 houses.

During the early 1980’s Clive Bailey the Grandson of the founder took over the running of the Company and steered the firm more into the commercial / industrial market, geographically moving further afield to secure jobs through the years of recession that followed. Having come through these difficult times the Company began to slowly expand again diversifying into various engineering projects complimentary to the core business of Building Services.

In 1987 William Bailey Ltd had reached the point where larger storage, engineering and office accommodation were required and this was achieved by moving into new premises further along Wellington Street in Ripley as the Company continued to expand. 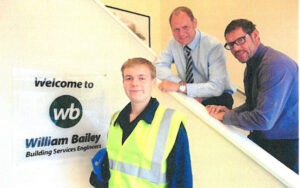 In 2007 William Bailey Ltd had again reached capacity which required larger storage, engineering and office accommodation and subsequently moved to much larger purpose built premises in Ambergate, Derbyshire to facilitate the expanding need for I.T., Modern Technology, CAD Design and off site prefabrication.

From this base the Company employs a dedicated workforce of engineers and staff who undertake both large and small mechanical and electrical projects throughout the UK. All internal and external staff are fully trained to the highest level and take refresher courses to remain updated on the latest standards along with Health and Safety requirements.

We are very proud of our history and reputation as a client-oriented family business and continue to embrace new ideas and ways of thinking so we can deliver projects which are innovative, competitive and sustainable, striving to set high standards for future development.